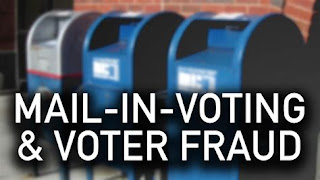 A man who’s made a living developing fraud detection algorithms has discovered a curious phenomenon: Counties that started using Dominion Voting Systems machines have on average moved by 2 to 3 points to the Democrat presidential candidate from the Republican compared to counties that didn’t adopt the machines.

The difference persisted even after he controlled for a number of factors, including county population and various demographic characteristics.

“I recommend we audit the machines,” he concluded.

The man is Ben Turner, who used to be the chief actuary at Texas Mutual Workers’ Compensation Insurance. He now runs Fraud Spotters, a consultancy specializing in detecting insurance fraud.

The Epoch Times replicated his initial analysis using the same data he used and arrived at the same results.

Turner told The Epoch Times that he’s not making any specific allegation against Dominion; he’s simply reporting what he found.

Dominion didn’t immediately respond to a request by The Epoch Times for comment. The company has for years been criticized over alleged vulnerabilities in its system. It has previously denied that its machines can be used to switch votes from one candidate to another.

Turner reached his conclusion despite being initially incredulous about claims that the Dominion machines affected the election outcome.

While a Republican himself, virtually all of his colleagues and peers are Democrats, he said in a phone call. The outrageousness of the election fraud allegations made him question whether he was on the “wrong team,” he said.

“I don’t know how to process these allegations,” he said in a recent blog post. “They sound so extreme and far-fetched that they are easy to blow off as ridiculous.”

But he also saw some very mainstream concerns about election systems security, pointing to an HBO documentary released earlier this year on the topic.

Given his expertise, he decided to look into the claims just to get some clarity for himself.

Eventually, however, he realized he needed to go public.

“I kind of was too afraid to go public because I knew that it won’t help me in terms of, you know, half the population now thinks that I’m a tin-foil-hat person. And I’m aware of that,” he said.

“But I just decided that if nobody can prove me wrong, it’s not fair for me to withhold this information, and that it belongs in the hands of the public.

“If I’ve done something wrong with the analysis, then maybe somebody out there will prove it wrong, and that’s fine with me. I’d rather get to the truth than be right. I felt like if I didn’t publish this, I’m a coward.”

He looked at how, county-by-county, election results changed between the 2008 and 2020 presidential races, measuring whether adoption of Dominion would have any overall effect on the changes. He picked the 2008 election because, at the time, only New York State had widely adopted Dominion, according to data from VerifiedVoting.Org. He excluded New York from the analysis, leaving him 657 counties that have adopted Dominion and 2,388 that have not as of 2020.

Later, he added seven more control factors to the analysis, including race, voter preference, and population. Not only did the “Dominion effect” persist, but the probability of his results being a fluke decreased.

The effect somewhat decreased, to a 2.84-point shift, when he also controlled for age.

The probability that the results occurred by chance or due to some unobserved factor was about 1 in 1,000, the analysis showed.

In his estimation, the results were significant enough to potentially flip elections in at least four states: Georgia, Arizona, Wisconsin, and Nevada.

Although his analysis indicated on average about a 3-point “Dominion effect,” it may be higher in some states and lower in others, he said.

“If you believe the Dominion effect is real, it is not hard to believe that this effect would be greater in swing states and could have swung these four states into Biden’s column, putting the electoral college in his favor,” he wrote.

The effect dropped to less than a 2-point blue shift when Georgia was excluded from the analysis.

“I believe this is indicating that Georgia is the strongest case for auditing,” he wrote in an FAQ article that addresses questions about his work.

He showed his findings to about 10 people with statistical expertise, two of whom provided him substantial feedback. Neither could find fault with his analysis, he said, and neither wanted their name associated with it.

The Epoch Times spoke to one of the two, who ran a slightly different statistical model on the same data arriving at nearly the same results. The expert concluded Turner’s model was “reasonable,” given the limitations of the data.

Ultimately, he ran the analysis with about 100 controls. The effect was reduced to about a 2-point shift toward Biden. He said that at this point, the statistical model started to suffer from “multicollinearity,” meaning many of the control factors were overlapping, which caused the model to provide less reliable results for any single variable, including the “Dominion effect.”

“Once we start to overfit the model, it gets complicated to decipher, and it would take some time to sort out the issues, and even then, it may become a matter of opinion,” he said via email.

He said the results would be safer to report as a range.

“I would say the national average effect appears to be somewhere between 1.0% and 1.6%,” he wrote.

The data isn’t robust enough to narrow the analysis down to any particular state, he said.

The findings aren’t enough on their own to “win a court case,” he said. A statistical analysis, no matter how sophisticated, can be wrong. But he argued the four states should allow Republicans to audit the machines.

If this was a suspected insurance fraud case, the results would warrant a probe, he said.

“If this were an insurance company operation, we would have all these investigators investigating the people that we thought were behind the fraud.”

The Epoch Times asked Walter Mebane, statistics professor and election fraud expert at the University of Michigan, to review Turner’s findings. He declined.

“Sorry, but I have no time for this,” he said in an email. “The assumptions that everything is the same over time except the machines are ridiculous.”

While Turner didn’t control for more specific demographic changes over time, such as by age and income, he did control for overall population change.

A researcher associated with The Epoch Times reached out to two statistics professors at two American universities who both found Turner’s methodology sound, but neither agreed to have their name published.

Dominion has been under fire for years over alleged vulnerabilities in its system. A recent forensic audit in one Michigan county concluded the system is “intentionally and purposefully designed with inherent errors to create systemic fraud and influence election results.”

A former military intelligence analyst alleged in a sworn affidavit that the Dominion software was accessed by agents of malicious actors, such as China and Iran, to monitor and manipulate the 2020 election.

The company has denied that its software can be used to switch votes from one candidate to another or that it has foreign government ties.

One county election supervisor in Georgia demonstrated that the Dominion software allows changing votes through its “adjudication” feature.

A Georgia state election official said the adjudication creates a log through which it can be traced who made any changes to a ballot.

Turner called on Biden, local election officials, and Dominion to consider that so many people are already convinced fraud occurred.

“Future President Joe Biden: Do you want a significant portion of the population to believe your presidency was only won through Dominion voting systems?” he wrote.

“Dominion Corporation: Do you want a significant portion of the population to distrust you and demand that your machines are not used?”

“Arizona, Georgia, Nevada, and Wisconsin election officials: Do you want a significant portion of your constituents to believe you are part of a conspiracy?”

The only solution now is transparency, he said.

“Do we want another four years where one side of the political divide continually argues that the election was not valid? Will that help our society?”