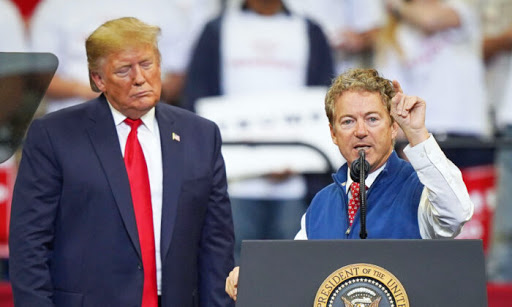 President Donald Trump looks on as Sen. Rand Paul (R-Ky.) speaks at a campaign rally at the Rupp Arena in Lexington, Ky., on Nov. 4, 2019. (Bryan Woolston/Getty Images)
BY JACK PHILLIPS

Sen. Rand Paul (R-Ky.) rejected the notion that courts have “decided the facts” amid allegations of election fraud during the Nov. 3 election.

“The courts have not decided the facts,” Paul said during an election integrity hearing on Wednesday. “The courts never looked at the facts. The courts don’t like elections, and they stayed out of it by finding an excuse.”

The Kentucky senator went on to say that courts mainly rejected lawsuits from President Donald Trump’s team or other election-related lawsuits on procedural grounds.

Former special counsel and U.S. solicitor general Ken Starr told Paul and other Senate Homeland Security members that of the 60 court cases involving voter fraud allegations, the “vast majority” of them were tossed by judges over procedural reasons instead of merit.

“The legal question there is a very easy one to decide,” Paul said in response. “Even as a physician, I can figure out that the secretary of state cannot create law.”

He continued: “I think there is a lot of work to be done.”

Paul, meanwhile, appeared to agree with President Trump and his legal team in that fraud occurred during the General Election.

“The fraud happened. The election in many ways was stolen and the only way it will be fixed is by in the future reinforcing the laws,” Paul said during Wednesday’s hearing.

Paul’s remarks are notable because he has floated the idea—along with several other members of Congress—to challenge the election outcome to overturn the results in several states while votes are being read during the Joint Session of Congress on Jan. 6.

Rep. Mo Brooks (R-Ala.) has said on multiple occasions that he would vote to try and invalidate the Electoral College votes of several key states.

“To say it was the safest election, sure I agree with your statement if you are referring to foreign intervention, but if you are saying it’s the safest election based on no dead people voted … no people broke the absentee rules, I think that is false and I think that’s what’s upset a lot of people on our side is that they are taking your statement to mean there, oh there were no problems in the election, I don’t think you examined any of the problems we heard here, so really you are just referring to something differently the way I look at it,” Paul also said to fired former election cybersecurity chief Chris Krebs.

Krebs, before his ouster, said the Department of Homeland Security’s (DHS) cybersecurity bureau found no evidence of foreign interference, describing it as the safest election in U.S. history last month.

Secretaries of state for several key states have said they have found no evidence of voter fraud that would overturn the result of the election.