Tucker Carlson: How Election was Rigged 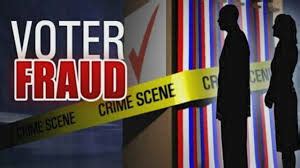 TUCKER CARLSON, FOX NEWS: You've heard a lot over the past few days about the security of our electronic voting machines. This is a real and serious issue, no matter who raises it or who tries to dismiss it out of hand as a conspiracy theory.

Electronic voting is not as secure as traditional hand counting. It never will be as secure. Voters can see this, because it's obvious, and it makes them nervous. And why wouldn't it make them nervous? Our leaders have given us every reason not to trust technology. The people now telling us to stop asking questions about voting machines are the same ones who claimed that our phones weren't listening to us. They lie. We all know that.

Other countries don't use electronic voting because they know it undermines confidence in democracy. A system cannot function if no one trusts the vote. That's true here, too, as we're finding out. Going forward, we need to find out exactly what happened in this month's presidential election, no matter how long it takes the investigation to unfold or how much it costs.

Once we get answers from that investigation, we ought to revert immediately to the traditional system of voting, the one that served our democracy for hundreds of years. What we're doing now is not working. That's an understatement. As of Monday night, the state of New York still hadn't managed to count the votes in five House races thanks to mail-in voting. That's a disaster, and we should stop pretending that it's not.

But we also shouldn't let our focus on voting machines distract us from all that happened earlier this month. The 2020 presidential election was not fair, and no honest person would claim that it was. The system was rigged against one candidate and in favor of another, and not in ways that were hidden from view.

The media openly colluded with the Democratic nominees. Joe Biden and Kamala Harris refused to explain what they would do if they were elected. That's never happened before in any presidential election in American history, but the media allowed them to do it.

At the same time, beginning in the spring, Democrats used our public health emergency for nakedly partisan ends. They punished Trump supporters for trying to gather, but they exempted their own activists -- rioters and vandals from Black Lives Matter and Antifa -- from the COVID lockdowns entirely. The restrictions they did enforce crushed America's small businesses, the heart of the Republican Party, while making their own donors fantastically richer. Jeff Bezos alone saw his net worth jump by more than $70 billion during the pandemic.

Then, Democrats used the coronavirus to change the system of voting. They vastly increased the number of mail-in ballots because they knew their candidates would benefit from less secure voting. And they were right. They used the courts to neutralize the Republican Party's single most effective get out the vote operation, which for generations had been the National Rifle Association. Not enough has been written about this, but anyone on the ground saw it. Thanks to legal harassment from the left, the NRA played a vastly reduced role in this election, and that made a huge difference in swing states like Pennsylvania and others.

But above all, Democrats harnessed the power of Big Tech to win this election. Virtually all news and all information in the English-speaking world travels through a single company, Google. A huge percentage of our political debates take place on Facebook and Twitter. If you use technology to censor the ideas that people are allowed to express online, ultimately, you control how the population votes. And that's exactly what they did. They rigged the election in front of all of us and nobody did anything about it.