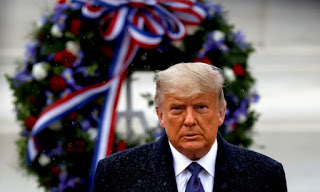 Trump approached the wreath and saluted at the Tomb of the Unknown Soldier, stood for a moment of silence, then retreated and saluted again.

This is the first official public event Trump attended since the election.

“America’s veterans have fought to defend our country, its values, and its interests since the first days of our founding. They have defeated tyrants, eliminated terrorists, and secured freedom at home and abroad,” Trump said in a proclamation released by the White House.

“The gravity of their contribution is immeasurable and so is our debt to every single one of our Nation’s veterans,” Trump continued in the proclamation.

“This Veterans Day, I feel the full weight of the honor and the responsibility that has been entrusted to me by the American people as the next president, and I vow to honor our country’s sacred obligation,” Biden said in a statement.

However, Trump hasn’t conceded yet and said the race is far from over. The Trump campaign’s legal team filed lawsuits in several key states, claiming significant voter fraud and irregularities involved.

Mainstream media declared that Biden won the election on Nov. 7.

The Epoch Times will not declare a winner of the 2020 presidential election until all results are certified and any legal challenges are resolved, the editorial board announced on Nov. 6.