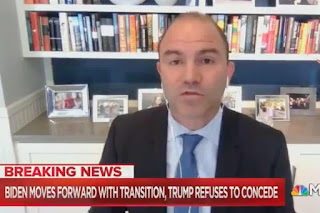 Ben Rhodes, a former deputy national security advisor for President Barack Obama, said on MSNBC that Biden already was speaking with foreign nations prior to his taking office—or even being formally elected.

“The center of political gravity in this country and the world is shifting to Joe Biden,” Rhodes claimed. “Foreign leaders are already having phone calls with Joe Biden, talking about the agenda they’re going to pursue Jan. 20.”

It’s unclear whom Biden has spoken with. But Iran and Israel have recognized him as the president-elect. Iran’s leaders also publicly requested that Biden resurrect the 2015 nuclear deal which President Donald Trump withdrew from.

Rhodes, the brother of former CBS News president David Rhodes, was one of the original architects of the plan to sell the controversial Iran deal to the public by soliciting mainstream media complicity.

His later boasts about its success helped to coin the term “echo chamber” in modern political vernacular as the group-think phenomenon through which obsequious members of the press help propel Democrat talking points into widely accepted truths.

Biden’s campaign has again used the strategy to project an air of inevitability following the recent election—potentially laying the groundwork for mass demonstrations of public outrage should Trump succeed in his legal challenges against the dubiously premature projections for Biden.

Ironically, Biden’s plan for stealing the 2020 election from the incumbent president marks a full 180-degree reversal from the Obama-era plot he helped hatch against the incoming Trump administration after its 2016 defeat of Hillary Clinton.

The Logan Act is the same 220-year-old law that the FBI used to justify its probe into Flynn, a former Obama official who had double-crossed the Democrat administration by backing Trump.

After Obama, claiming interference in the 2016 election, imposed draconian sanctions on Russia, Flynn was contacted several times by Russian Ambassador Sergey Kislyak in the month prior to Trump’s inauguration.

Flynn told Kislyak not to retaliate for the sanctions—which included the expulsion of diplomats—since Trump, who had openly campaigned on his hopes of achieving a detente with Russian President Vladimir Putin, did not plan to enforce them.

According to now-declassified documents, several top Obama officials abused their power to unmask NSA reports about the surveillance-intercepted phone calls and then leak their contents to the media.

At a Jan. 5 Oval Office gathering, Obama and Biden plotted with top advisers on whether to withhold sensitive information from Flynn, whom they deemed untrustworthy, in light of the calls.

During the meeting, then-FBI Director James Comey acknowledged that the phone calls were above board, according to the accounts of those present.

Thus, “Flynn’s ordinary call with the Russian ambassador became the pretext for further abuse of FBI and NSA powers as part of the security state’s ongoing efforts to interfere in the 2016 election and then sabotage the Trump administration before it even began,” Greenwald wrote.

While Flynn’s call was relatively innocuous, Biden’s alleged negotiations with Iran and other foreign entities appear to be expressly for the purpose of undermining current US policy and potentially shoring up his own global support for a disputed election claim.

If Trump prevails in his legal challenges, Democrats’ strategic coalition of allies in the media, the federal bureaucracy and globalist foreign powers will push to delegitimize the Supreme Court and mobilize radical activists to create mass unrest, pressuring the president’s backers to capitulate.

Some shocked onlookers may already have been duped into thinking Biden won, and they will thus accept the Left’s gas-lighting claims that it is Trump, not Biden, trying to steal the election.

“We’re going to have the pageantry already of the president-elect announcing his advisory board,” Rhodes said. “He’s going to start announcing Cabinet secretaries.”

Greenwald, a leftist himself, said he theoretically supports Biden’s prerogative, if elected, to negotiate with foreign leaders. However, he said the open display of such conversations on a cable-news program revealed the hypocrisy of the permanent bureaucracy.

“That was always the most shocking part of this abusive prosecution by a radically politicized FBI: the blatantly improper attempt to convert a normal conversation by a transition official into a form of treason,” he wrote.

at November 11, 2020
Email ThisBlogThis!Share to TwitterShare to FacebookShare to Pinterest
Labels: Bình Luận