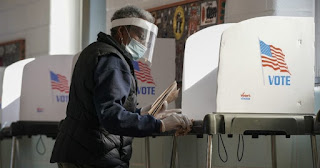 An election worker in Detroit has signed an affidavit alleging she witnessed widespread election fraud in the city leading up to and during Tuesday’s presidential election.

Biden has been declared the winner of Tuesday’s election by the establishment media.

Those are simply projections at this point, but the Trump campaign has vowed to fight tooth and nail to prove the election was “stolen.”

The campaign is only just beginning to provide evidence it has promised will show widespread election fraud.

The evidence from Jacob in Detroit, if proven, could potentially show a widespread effort to flip the battleground state of Michigan for Biden.

“Detroit elections worker: ‘I was instructed by my supervisor to adjust the mailing date of these absentee ballot packages to be dated earlier than they were actually sent. The supervisor was making announcements for all workers to engage in this practice.’”

In another tweet, Harrington displayed the affidavit as direct evidence of “fraud.”

Jacob, in the affidavit, offered a firsthand account of an alleged massive scheme to flip the state for Biden.

“I directly observed, on a daily basis, City of Detroit election workers and employees coaching and trying to coach voters to vote for Joe Biden and the Democrat party,” Jacob wrote.

She added, “I witnessed these workers and employees encouraging voters to do a straight Democrat ballot.”

In the affidavit, Jacob also said she was instructed by a supervisor to “adjust the mailing date” of absentee ballots to be “dated earlier than they were actually sent.”

“The supervisor was making announcements for all workers to engage in this practice,” the woman claimed.

Jacob said she worked at the Detroit election headquarters for most of the month of September before she was moved to satellite office in October.

Jacob added that a supervisor ordered her “not to ask for a driver’s license or any photo I.D. when a person was trying to vote.”

At the satellite location, she said she observed a “large number of people” showing up to vote in-person who “had already applied for an absentee ballot.”

The bombshell claim from Jacob comes as the president’s team begins the long process of proving its claims that the election was marred with widespread election fraud relating to ballot irregularities in swing states.

Politico reported Biden won in Michigan by more than 146,000 votes.