Georgia to Conduct a Hand Recount of Election Ballots

Georgia to Conduct a Hand Recount of Election Ballots 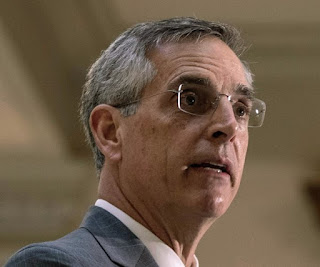 Georgia's top election official said Wednesday the state will conduct a hand recount of all paper ballots cast in the Nov. 3 presidential election.

Uncertified results in the state show Democrat Joe Biden leading President Donald Trump by 14,000 votes out of nearly 5 million votes counted in the state. Nearly all ballots have been counted, though counties have until Friday to certify their results.

"Mathematically, you actually have to do a full hand-by-hand recount of all because the margin is so close," Georgia's Secretary of State Brad Raffensperger said at a news conference. "We want to start this before the week is up."

Raffensperger, a a Republican, said the recount will be conducted by hand in each of Georgia’s 159 counties.  He expects the recount to take until Nov. 20, which is the certification deadline.

Georgia's recount rules allow each candidate or a designated representative to observe the process.

After results from the hand recount are certified, the losing campaign can then request another recount, which will be performed by machine, Raffensperger said.

There is no mandatory recount law in Georgia, but state law provides that option to a trailing candidate if the margin is less than 0.5 percentage points. Biden’s lead stood at 0.28 percentage points as of Wednesday morning.