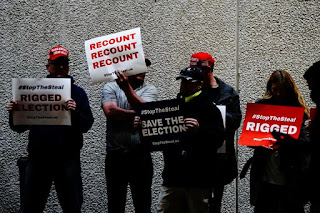 Former Nevada Attorney General Adam Laxalt announced that the Donald Trump campaign is yet to inspect over 600,000 mail-in ballots counted by state elections authorities at an election integrity rally on Sunday.

“This campaign has not observed- not laid our eyes on- on an envelope signature, and a voter roll signature on a single one of those 600,000 voters.”

Laxalt went on to announce that the Trump campaign identified over 9,000 ballots cast by individuals who do not live in the state of Nevada.

Nevada’s election has been unexpectedly close, with Joe Biden up on Donald Trump by a margin of approximately 657,000 to 625,000.  A small portion of unlawful or spoiled ballots could conceivably change the outcome of the state’s election.