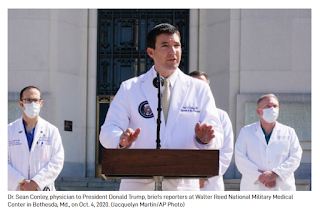 President Donald Trump’s condition has “continued to improve,” according to White House physician Dr. Sean P. Conley, who said during an Oct. 4 news conference that the president briefly received supplemental oxygen on Oct. 2.

The president appeared in a video in which he thanked hospital staff at the Walter Reed National Military Medical Center while hinting he would make a “little surprise visit” to those gathered outside the hospital. Later, he was seen waving to supporters from a car while wearing a mask.

Conley’s team said his “vital signs are stable” and the president hasn’t complained of shortness of breath. He is still taking anti-viral drug remdesivir after completing his second round of the drug on Oct. 3, the team said.

Trump’s blood oxygen level dropped down to 93 percent on Oct. 3 but rose to 98 percent on Oct. 4, Conley told reporters outside Walter Reed National Military Medical Center in Maryland, about 15 miles from the White House.

While it isn’t clear exactly when Trump contracted the virus, he said on Oct. 1 that he and his wife had tested positive.

During the news conference, another medical specialist said the president could return to the White House “as early as tomorrow” and that he has been “up and around.”

“We initiated dexamethasone and he received his first dose yesterday,” said Dr. Brian Garibaldi. “Our plan is to continue that for the time being.”

“Today he has been up and around and our plan is to have him eat and drink and be up out of bed as much as possible, and if he continues to look and feel as well as he does today, our hope is that we plan for discharge as early as tomorrow to the White House where he can continue his treatment course,” Garibaldi added.

During the briefing, Trump’s doctors appeared upbeat and projected a positive message about the president’s condition. He currently isn’t on supplemental oxygen.

White House national security adviser Robert O’Brien said on Oct. 4 that the president “feels very well” and wants to return to the White House. He noted that Trump would likely remain hospitalized for the time being.

“I spoke with the chief of staff this morning, and the good news is the president feels very well. And he actually wants to get back home to the White House and get back to work,” O’Brien said on CBS’ Face the Nation. “But I think he’s going to stay at Walter Reed for at least another period of time.”

During the segment O’Brien brushed aside any notion that the president would temporarily sign over power while undergoing medical treatment: “He’s firmly in command of the government of the country.”

The White House medical unit are working “very hard” on contact tracing, O’Brien noted, adding that the people working in government departments such as the Pentagon and the State Department are making sure the country is safe.

“We’re in very good shape,” he said. “We’ve got a great team in place and the president’s firmly in control.”

“It came from China. We can never forget who’s to blame for it,” he said. “But we’ve got to continue to have the conversation so the American people can make a big decision at the end of this month.”

Former New York City Mayor Rudy Giuliani said he holds China responsible for Trump becoming infected with the virus. Giuliani, who is currently the president’s personal attorney, made the comment in an interview with Fox News on Oct. 4.

“And we assert ourselves as the most powerful nation on earth because otherwise you know who will? The country that attacked us, China. And they attacked us with this, believe me,” Giuliani said. “I hold them responsible for what happened to my president the day before yesterday and everybody else.”

Jack Phillips and Zachary Stieber contributed to this report.