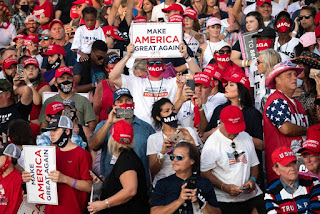 Millions of Americans from all walks of life across the country support President Trump — men and women, wealthy and poor, of all races and ethnicities. Backers of his administration’s policies are diverse — and they are many.

So, too, are the reasons for supporting and reelecting him to serve America for another four years. Among them: his unapologetic, full-bore efforts to improve America’s trade policy and willingness to withdraw from international deals that don’t put America first; his commitment to Israel, our greatest ally in the Middle East, and tremendous accomplishment of helping the Jewish state secure peaceful relations with its Arab neighbors; and his support of the American worker and demonstrated ability to trade business-as-usual for smart business moves.

But essentially, when you boil it down, President Trump really has only two types of supporters.

The first are the Americans who are all-in for Trump, displaying a devotion the likes of which we have not seen before in modern American politics. These are the people who view Trump as the sole source of straight talk and adamantly believe that he can do no wrong.

These supporters are fully behind him, accepting both his personality and his ideology; some might say they elevate him to near-cult status. They reject all criticism out of hand, and are unwilling or unable to recognize that the president, like everyone else, is imperfect. They deem his speeches, statements and social media posts as the only sources of information worthy of their trust. They believe that Trump is the only person who can lead our country forward.

In the worldview of these Trump supporters, the media are untrustworthy. Criticisms of the president’s actions or rhetoric are overlooked, shoved aside with the label of “fake news.” Any critique of Trump’s policies or his personality are considered ad hominem attacks by the liberal media. For these supporters — who comprise much of his base — President Trump’s every utterance takes on the sheen of immutable truth.

These Trump devotees are loud and proud, donning MAGA hats and adorning their vehicles and lawns with “Trump/Pence 2020” flags and signs. They are outspoken, quick to rush to Trump’s defense when he punches back against every perceived slight.

The other camp of Trump supporters is America’s silent majority. These are people who have tremendous support for the policies enacted by the president and believe that he is fulfilling his pledge to make the country greater. That said, they do harbor some concerns about his controversial style.

If we are being honest, we would have to include most Republican members of the House and Senate in this group. Privately, from time to time, they may express concerns about the president’s behavior or his erratic style. But they will work tirelessly to back him and endeavor to secure his reelection because they believe that the end justifies the means.

And what is the “end” result? Qualified, conservative nominees to the Supreme Court and other federal courts. Reduced government spending and waste, and elimination of bureaucratic red tape and over-regulation. More business-friendly economic policies.

Since day one, Trump has been a revolutionary president unlike any of his predecessors, demonstrating the courage to shake things up and refusing to accept the business-as-usual approach in Washington that has failed many Americans for generations.

While his more measured supporters may find the president morally questionable at times, and disapprove of his divisive rhetoric and bombastic tweets, they also see immense value in the changes that he has brought to the country. Despite their frustrations, they are willing to look the other way when it comes to Trump’s shortfalls, because he enacts the right foreign and domestic policies.

Many religious Americans may find themselves uneasy with some of Trump’s words or actions, but they are still willing to stand with him in order to move America in the right direction and closer to our cherished Judeo-Christian values — even if Trump sometimes fails to demonstrate these values with his pugilistic approach.

In the end, on Nov. 3, Americans must choose between a Democratic ticket that will jerk America toward a hard-left, socialist slant or a president with the proven ability to create jobs and restart our economy.

Is President Trump perfect? Of course not, but that is a standard to which none of us should be held. On many occasions I have expressed disapproval about certain choices he has made, and encouraged him to pursue a more unifying approach.

But make no mistake, despite his faults, his unwavering base of supporters believes that President Trump remains the right man for the job at a time when America needs strength, confidence and optimism.

Armstrong Williams (@ARightSide) is the owner and manager of Howard Stirk Holdings I & II Broadcast Television Stations and the 2016 Multicultural Media Broadcast Owner of the Year. He is the author of “Reawakening Virtues.”