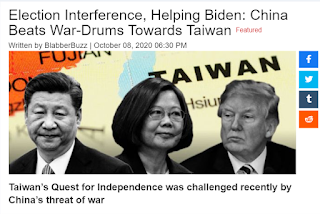 China imposes new threats on Taiwan and appears poised to increase military efforts to subjugate what it considers a “renegade province”, following an attempt by the island nation's opposition party to enter into closer cooperation with the United States.

Hu Xijin, editor-in-chief of the Chinese state-sponsored Global Times, wrote in a column Wednesday morning, "The only way forward is for the mainland to fully prepare itself for war and to give Taiwan secessionist forces a decisive punishment at any time," "As the secessionist forces' arrogance continues to swell, the historical turning point is getting closer."

Only a handful of small countries have formal diplomatic relations with Taiwan due to the U.S. choosing in 1979 to recognize only the government in Beijing – a non-negotiable condition, in a series of conditions China insisted upon before entering the global economy. Local analysts consider the KMT move to be impractical and unrealistic, and all practically dismiss any notion of future negotiations of the traditionalist party with Beijing. It also exceeds any proposal put forth so far by the pro-independence Democratic Progressive Party, led by Taiwanese President Tsai In-Wen.