DHS Highlights How Beijing Exploits Pandemic, Influences US Election for Its Goals

DHS Highlights How Beijing Exploits Pandemic, Influences US Election for Its Goals 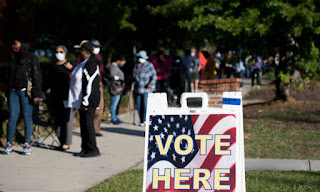 The Chinese regime has leveraged the pandemic crisis to boost its interests while carrying out its influence operations ahead of the U.S. elections, the latest report from the Department of Homeland Security (DHS) found.

In its first-ever report on security threats to the United States, released on Oct. 6, the DHS identified Beijing as a state actor that posed a “significant threat.” Among a list of concerns from China were disinformation campaigns, diplomatic pressure, and counterfeit medical products exported to the United States.

As the U.S. presidential election approaches, the Chinese regime will likely continue disinformation campaigns to “denigrate” the U.S. administration in an effort to reshape the U.S. narrative to its favor, the report said. State-directed cyber actors from China, Russia, and Iran could also undermine infrastructure related to the election and sow distrust among voters.

The posts from these accounts included content both “in support of and against presidential candidates Pete Buttigieg, Joe Biden, and Donald Trump,” according to Facebook.

A Chinese hacking group known as Zirconium has also carried out thousands of attacks between March and September, targeting election campaign officials and prominent individuals, according to Microsoft. The hacking attempts resulted in 150 security breaches.

The Office of the Director of National Intelligence concluded, in a statement, that the Chinese regime “prefers that President Trump–whom Beijing sees as unpredictable–does not win reelection.”

Chinese disinformation still appears to be somewhat “limited” compared to Russia’s campaigns, and are “not nearly as effective,” said Andrew Selepak, a social media professor at the University of Florida. But this could change soon as Beijing becomes more sophisticated in its methods, he added.

China’s election interference has been largely underreported and goes beyond what the DHS report has detailed, he told The Epoch Times. Furthermore, Beijing’s cyber tactics have become “much more nuanced and sophisticated in recent years than even many experts realize,” he said.

Grabowski said he was aware of at least two politics-oriented online forums that have been “slammed with traffic from China in recent months.”

The “propaganda and disinformation getting posted is invariably either pro-Beijing or anti-Trump,” he said.

Beijing has carried out a “multifaceted campaign” to influence the U.S. political atmosphere, said Ted Carpenter, a senior fellow on defense and foreign policy at the Cato Institute. For example, during the 2018 midterm election, Chinese state media placed ad inserts in American newspapers—part of a long-term strategy to subtly influence American voter opinion in China’s favor, Carpenter said.

The DHS report signals a “healthy development”—“a new level of attention” on the Chinese threats that have largely “flown under the radar” in the past years, he said in an interview.

The Chinese regime views U.S. economic challenges, such as the downturn following the virus health crisis, as a “key opportunity to create a dependency” on China and boost its influence, according to the report. Beijing also has think tanks actively gauging which U.S. localities could be most susceptible to such exploitation.

The report noted how Beijing used sister city relationships to obtain critical health supplies from the United States when the COVID-19 outbreak first emerged in China.

In February, after the city of Wuhan was under lockdown as the world’s first and worst-hit virus epicenter, a charity group in its sister city of Pittsburgh shipped over 450,000 surgical masks and 1,350 hazmat suits. Chinese media have touted the case as a model for sister city ties.

“Having a sister city is like having any other close friendship. You share each other’s triumphs and tragedies,” said Sarah Boal of Pittsburgh-based Brother’s Brother Foundation, the charity group that planned the shipment to China, in an interview with state media China Daily.

Chinese officials in Chicago emailed a Wisconsin state senator in an attempt to get him to issue a resolution—already drafted by the Chinese consulate—proclaiming that Beijing succeeded in combating the outbreak. The efforts backfired and resulted in the senator, Roger Roth, introducing a bill to condemn the regime’s virus coverup.

“The reality is that most every state legislature in the country has probably received a letter from the CCP much like Senator Roth’s email as part of coordinated propaganda campaign,” said Secretary of State Mike Pompeo in a Sept. 23 speech.

While COVID-19 may have paused plans to bring officials on all-expenses-paid trips to China, a tactic Beijing had used to gain favor from U.S. officials, the regime is using other enticements such as real estate investments and giving discounts on medical supplies, the DHS report said.

Beijing, along with the Kremlin, pose the top threats to U.S. supply chain security, officials found. The report also named China as a “particularly persistent source” for counterfeit medical products during the outbreak.

In cracking down on substandard Chinese medical goods, U.S. authorities have seized over 1 million unapproved testing kits and 750,000 defective masks shipped from China, according to the report.

A recent independent medical product evaluation also found up to 70 percent of the Chinese masks tested “significantly inferior” to the U.S. standard.

During the pandemic, Beijing collected intelligence on U.S. supply chain weakness, hoping to leverage the provision of critical commodities as a condition to win U.S. concession on issues the regime deems critical, the report noted.

Dangers of over-reliance on China in the medical supply chain became apparent during the pandemic, when Beijing hoarded large quantities of critical medical inventory from around the world despite a global shortage.