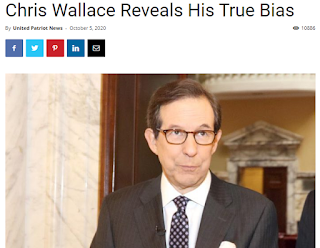 On Tuesday, several well-known journalists and political commentators took their frustration with moderator Chris Wallace out on social media. They were frustrated with Wallace’s performance during the first presidential debate between current President Donald Trump and former Vice President Joe Biden.

The debate reached a point when Trump couldn’t hold back anymore and said to Wallace, “I guess I’m debating you, not him [Biden], but that’s OK. I’m not surprised.”

Even before President Trump had addressed him, Wallace had repeatedly interrupted Trump to let Biden speak. He had said more than once, “Mr. President let him finish,” and “Please let him speak.”

Andrew McCarthy, the United States Attorney for the Southern District of New York, pointed out that Wallace felt the need to interrupt Trump whenever Biden had trouble answering Trump’s questions.

Founder and president of Turning Point USA; Charlie Kirk could no longer keep quiet after several arguments between Trump and Wallace. He tweeted that President Trump “shouldn’t have to debate both Chris Wallace AND Joe Biden.”

Stephen Miller, a senior advisor for policy to President Donald Trump, took note of the fact that Wallace “laughed along” with Biden during the debate, and that it did not look good.

Republican former game show host, Chuck Woolery shared what the most interesting thing about the debate was to him.

“Chris Wallace, the most interesting thing was watching him reveal his bias for all to see,” Woolery wrote on Twitter. “Did you see what I saw? Trump wins debate with Wallace and Biden.”

at October 05, 2020
Email ThisBlogThis!Share to TwitterShare to FacebookShare to Pinterest
Labels: Election