Barrett: ‘I’m Not Here on a Mission to Destroy the Affordable Care Act’

Barrett: ‘I’m Not Here on a Mission to Destroy the Affordable Care Act’ 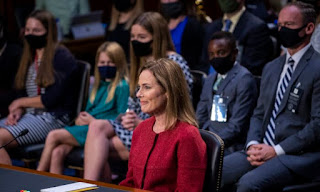 Supreme Court nominee Amy Coney Barrett said on Tuesday that she will approach cases involving questions related to the Affordable Care Act (ACA), also known as Obamacare, without any bias or hostility.

During the second day of her confirmation hearings, Barrett repeatedly faced questions about her views on the ACA because of an article she wrote as a law professor criticizing Chief Justice John Roberts’s reasoning in the case National Federation of Independent Business v. Sebelius, which upheld the ACA.

In that article, Barrett argued that Roberts had “pushed the Affordable Care Act beyond its plausible meaning to save the statute.” She said that if Roberts had treated the “individual mandate,” a provision that imposed a penalty on those without health insurance, as it was described in the legislation, the law would have been invalidated.

“Chief Justice Roberts pushed the Affordable Care Act beyond its plausible meaning to save the statute. He construed the penalty imposed on those without health insurance as a tax, which permitted him to sustain the statute as a valid exercise of the taxing power,” Barrett wrote (pdf) at the time. “Had he treated the payment as the statute did—as a penalty—he would have had to invalidate the statute as lying beyond Congress’s commerce power.”

In an exchange with Sen. Chris Coons (D-Del.), Barrett explained that her writing was an academic critique, which she says is an exercise that is different from judicial decision making. She said in the article, she was commentating on what the majority had adopted as its reasoning and was not “attacking Chief Justice Roberts or impugning his character or anything of that sort.”

“It was an academic critique. I want to emphasize, given the line of questions you are asking, that I am standing before the committee today saying I have the integrity to act consistently with my oath and apply the law as the law, approach the ACA and any other statute without bias, and I have not made any commitments or deals. Anything like that,” she told the senator.

“I’m not here on a mission to destroy the Affordable Care Act. I’m just here to apply the law and adhere to the rule of law,” she added.

Barrett, throughout the hearing, told the senators that the question before the Supreme Court in the ACA case in November, cited as California v. Texas, is different from what the court had previously decided on in NFIB v. Sebelius and another ACA-related case King v. Burwell.

She said the issue before the court is whether a provision of the ACA, known as the individual mandate, which required people to obtain health insurance or pay a tax penalty, was severable from the rest of the health care law after Congress set the penalty to zero.

Earlier in the hearing, she told senators that she did not have any conversations with or make any promises to President Donald Trump or anyone on how she would rule on the ACA case or any Supreme Court case.

“I have had no conversations with the president or any of the staff on how I might rule in that case,” Barrett told Sen. Patrick Leahy (D-Vt.).

She stressed that it would be a “gross violation of judicial independence” to make such a commitment and that it was also a violation of the independence of the judiciary for anyone to appoint a justice on the top court for the purposes of “obtaining a particular result.”

She also refused to commit to recusing from cases related to the ACA, saying that recusal is a legal issue that is governed by federal statute and precedents, which she would abide by.

Senate Democrats, who have been vocal about their opposition to Barrett’s nomination, are making the case that the judge would not hesitate to repeal former President Barack Obama’s signature health care law. Throughout the hearing, they have been making the point that Trump and the Republicans are using the court to strike down the ACA, which they claim would result in many Americans losing their health care.

Moreover, Democrats are claiming that Trump had nominated jurists who would carry out his agenda to terminate Obamacare, which he has criticized. Trump has previously said in statements that his “judicial appointments will do the right thing unlike Bush’s appointee John Roberts on ObamaCare.”

“Health care coverage for millions of Americans is at stake with this nomination,” Ranking Member of the Senate Judiciary Committee Dianne Feinstein (D-Calif.) said during her opening statement on Monday.

“If Judge Barrett is confirmed, Americans stand to lose the benefits that the ACA provides,” she added.