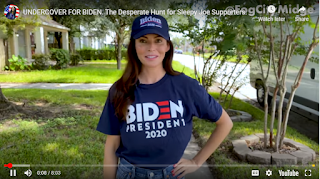 The first part of her political ‘treasure hunt‘ was fruitless, to say the least. The people she tried to interview in the beginning appeared to have an opinion, but none of them wanted to share it with her.

She later theorized that these were likely Trump supporters who were staying ‘silent’ because of her Biden gear.

Eventually, she found a few reluctant Biden “supporters”. But even then, none of them had any real substance as to why they were going to vote for him. Their main argument was that he was “not Trump”.

One lady said Joe Biden was going to win the election but she couldn’t identify a single thing that he had done in his 47 year career.

Another man who says he is voting for Biden shared this about the 2016 election:

We had a watch party in 2016.  We thought Hillary was just going to ride to victory and that was the worst party ever.  So we’re not going to have any parties this year.

The interviewer ended with:

There is not overwhelming support for Joe Biden.