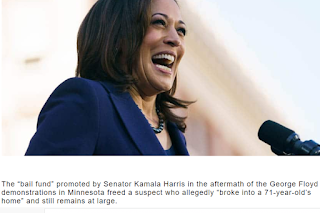 The “bail fund” released multiple suspects back onto the streets, some of whom committed additional criminal acts after leaving jail cells in Minnesota.

“The Minnesota Freedom Fund also helped post bail for a man accused of assaulting an elderly woman as he burglarized her home, court records obtained by the Daily Caller News Foundation reveal,” writes the Daily Caller.

“A man facing up to 30 years in prison for allegedly sexually assaulting an eight-year-old girl is among those who were bailed out of jail by the Minnesota Freedom Fund promoted by Democratic nominee for Vice President Kamala Harris,” reports the Daily Caller.

Vice Presidential nominee Kamala Harris blatantly sided with anti-police activists in Minnesota at the height of that state’s riots back in June; asking activists to “help post bail” for random people while posting a link to the ‘Minnesota Freedom Fund.’

“If you’re able to, chip in now to the @MNFreedomFund to help post bail for those protesting on the ground in Minnesota,” posted Harris. 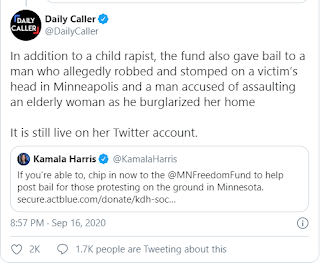 The Senator’s double-standard on the environment was also on display last week when arrived in her private jet and entered her private SUV after calling for the ‘Green New Deal’.

Wheels down in Miami,” posted Harris.

at September 17, 2020
Email ThisBlogThis!Share to TwitterShare to FacebookShare to Pinterest
Labels: Sean Hannity