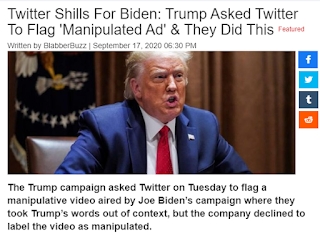 The Trump campaign asked Twitter on Tuesday to flag a manipulative video aired by Joe Biden’s campaign where they took Trump’s words out of context, but the company declined to label the video as manipulated.

The video implies that there is a contradiction to what Trump says in public versus in private on the coronavirus, blaming him of lying to the public. One of the examples of Trump's public comments in the video is from a Feb. 28 campaign rally at which Trump appears to be calling the coronavirus a hoax.

"The coronavirus, and this is their new hoax," Trump is heard saying in the manipulated video.

The president did not say "this is their new hoax" immediately after he said "coronavirus" in his original comments, as the edited video appears to show so. He made the hoax comment a few sentences afterwards. Trump was still talking about the coronavirus when he said the "hoax" part of the comment, but it was in reference to the media and how it covered his impeachment trial.

"Joe Biden relies on lies and fabrications and doctored videos to attack President Trump’s phenomenal handling of the deadly virus unleashed by China," Trump campaign spokesman Matt Wolking said in a statement. "Slow Joe can’t name a single thing he would have done differently if he had been president, other than refusing to restrict travel from China, which would have resulted in more dead Americans." Bates continued in March: "We don’t trust his next-day cleanup attempt, and he has made many comments in that same vein." The Biden ad tweeted Tuesday goes on to allegedly feature what Trump says "in private" about the coronavirus. It cites phone calls of Trump speaking on the record to journalist Bob Woodward for his book on Trump's presidency in which Trump called the virus a "killer" and "the plague." Trump, surely, was not speaking privately at that moment. It was an on-the-record conversation with a journalist. Moreover, Trump has used the terms "plague" and "killer" to address the coronavirus repeatedly in public, even before his April interview with Woodward. He called the virus a "tough killer" on March 21. He called it a "plague" in a White House press briefing April 1. The video shows things that Trump had already said but in a fabricated context.