Trump Surging with Hispanic and Black Voters in Critical States

trump surging with hispanic and black voters in critical states 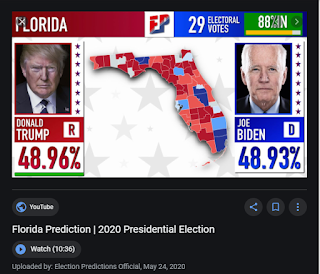 Joe Biden has a problem. Actually, he has a few problems. Recent polling shows that Donald Trump is running much stronger with Hispanics and black voters than he did in 2016. Those are demographic groups that Biden needs to win big if he has any hope of winning the election. If Trump’s strength with these voters continues, it will doom Biden and lead to a second Trump term.

In Florida, an NBC/Marist poll conducted earlier this month showed President Trump with 50 percent of the Hispanic vote to Biden’s 46 percent. In 2016, Clinton won 62 percent of Hispanics compared to 35 percent for Trump. Trump is also outperforming 2016 with black Floridians. The same poll shows him with 11 percent support compared to 8 percent in the last election. If those numbers hold, Florida is simply unwinnable for Biden.

Polling in other states tells a similar story. A poll of 750 likely voters conducted for the Center for American Greatness in Nevada by Pulse Opinion shows Biden leading Trump by just a single point (49 percent to 48 percent). As in Florida, Trump is running strong with Hispanics, getting 47 percent support to Biden’s 49 percent.

(View the crosstabs and topline results.)

For comparison, Trump got 29 percent of the Hispanic vote in 2016 to Hillary Clinton’s 60 percent. The poll also shows Trump with 41 percent of the black vote. Interestingly, he also ran stronger among bin Nevada in 2016 than he did nationally, so this is a continuation of that trend.

The Nevada survey also shows Trump with a slightly higher favorability rating compared to Biden (48 percent versus 46 percent) which undercuts the narrative that this is a race between a likable Biden and an unlikable Trump. This despite the constant drubbing Trump takes from elite media and the concomitant puffing of Biden.

Voters already have a fixed opinion of Donald Trump. But it turns out that they have one of Biden, too—and it’s not especially positive.

But it’s the loss of support among groups that historically have backed Democrats in a big way that must be a cause for concern among Democrats. If the trends seen in these polls apply in places like Arizona and North Carolina then the Biden campaign has a very narrow path to victory while Trump’s options increase. Here’s why:

There are essentially two tiers of battleground states. One group consists of Arizona, Florida, and North Carolina. These are all states that Trump won in 2016 that Democrats believe they can win this year. All three states lean Republican, but each has its own story offering Democrats a glimmer of hope.

Arizona, for example, elected a Democratic senator in 2018 for the first time in decades. If Biden can pick off even one of these states then would need to sweep the battleground states in the upper Midwest to win the election. Those states comprise the second group: Pennsylvania, Michigan, Wisconsin, and Minnesota. Trump won the first three in 2016 but by less than 80,000 votes combined. And he narrowly lost Minnesota.

As a practical matter, if Arizona, Florida, and North Carolina trend toward Trump over the next month, that would allow the campaign to focus more resources in those Midwestern states that would put him over the top. And it would cause Biden to spend time and money in states like Nevada that he’ll be afraid to lose.

The Center for American Greatness Nevada poll also hints at some further problems for Biden. Even some of his supporters don’t think he’ll win. This suggests an enthusiasm gap favoring the president.

Only 34 percent of Hispanics and 48 percent of blacks think Biden will win the election. If there is a further break towards one candidate or the other, don’t underestimate voters’ desire to back the one they believe will be the winner.

Enthusiasm counts because it drives donations and activism during the campaign and votes on election day. So the fact that only 66 percent of all Democrats in Nevada believe he will win compared to the 83 percent of Republicans who believe Trump will win points to a problem.

This is consistent with the enthusiasm gap we’ve seen elsewhere. During the summer, polling by the Center for American Greatness in Florida revealed that 72 percent of Trump voters strongly supported him compared to only 56 percent of Biden’s supporters strongly favoring him.

The fact that President Trump is increasing his support among Hispanic and black voters runs counter to the dominant narrative. But it shouldn’t. He got more votes from those two groups than Romney, McCain, or Bush. This is just a continuation of that trend. If it holds through election day, it will probably mean victory for Donald Trump.