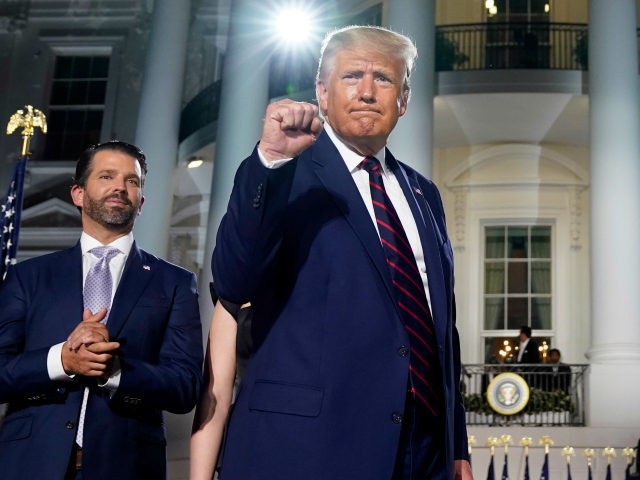 President Trump has received a significant bump in the polls in the aftermath of last week’s Republican National Convention (RNC), jumping to a three-point lead in the national popular vote and a seven-point lead in key battleground states in the Democracy Institute/Sunday Express Poll released Sunday.

The Democracy  Institute/Sunday Express Poll shows that President Trump leads Democratic presidential nominee Joe Biden 48 percent to 45 percent in the national popular vote, a one point bump from the two point lead the same poll found the president had in its survey released at the beginning of August. The president now also leads Biden by seven points in key battleground states, a two point bump from the five point lead he had in the same survey.

The Democracy Institute/Sunday Express Poll of 1,500 likely voters was conducted between Wednesday August 26 and Friday August 28 and has a 2.5 percent margin of error. Wednesday was the third day of the RNC, which ended on Thursday evening with the president’s acceptance speech. (The poll’s methodology description states, “The national party identification turnout model is: Democrats = 37 percent; Republicans = 35 percent; and Independents = 28 percent.”)

The Morning Consult Poll, conducted on Friday, August 29, the day after the convention ended, showed the president received a four point bump from the RNC. He now trails Biden by six points, 50 percent to 44 percent, compared to the ten points he trailed Biden by, 52 percent to 42 percent in the same poll conducted just prior to the RNC:

President Donald Trump needed a convention bounce — and he got one, emerging from the Republican National Convention with an improved standing against Democratic presidential nominee Joe Biden, fueled by gains among white voters and those in the suburbs, though he still trails the former vice president nationwide.

A new Morning Consult poll conducted Friday that asked 4,035 likely voters which candidate they would pick found Biden leading Trump by 6 percentage points, 50 percent to 44 percent. It marked a 4-point improvement from his standing heading into the convention on Aug. 23, when Biden led 52 percent to 42 percent. Friday’s poll had a 2-point margin of error, compared with a 1-point margin of error for responses gathered among 4,810 likely voters on Aug. 23.

The Democracy Institute/Sunday Express Poll shows that Trump leads Biden among white voters by a 53 percent to 45 percent margin. The president’s support among black and Hispanic voters has increased.

Thirty nine percent of Hispanic voters support President Trump, while only 50 percent support former Vice President Biden, a ten point increase in support among Hispanic voters for the president, compared to the 28 percent he received in the 2016 presidential election.

The poll also narrowed in battleground states with larger state-specific polls, which showed the following:

The most recent Democracy Institute/Sunday Express electoral college projection contains bad news for Biden in Wisconsin, which the early August poll projected would be the only state to switch from Trump in 2016 to the former vice president and Democratic nominee in 2020.

“Wisconsin is the last of the swing rust belt states to reach a tipping point on law and order,” Democracy Institute Polling Director Patrick Basham told Breitbart News in an exclusive interview.

As Breitbart News reported on Thursday, the violent Black Lives Matter riots that began in Kenosha, Wisconsin, last Sunday night after police in that city shot a 29-year-old black man, Jacob Blake, in the back seven times after he resisted arrest appear to have played a significant role in changing voter attitudes in Wisconsin towards President Trump and away from his Democratic challenger, Biden.

Law and order/riots/violence was the single top issue on the minds of poll respondents, with 37 percent identifying it as “the most important issue” to them:

Q “Which issue is most important to you?”

Q “Which phrase better fits your own thinking about race in America?”

Q “Do you approve or disapprove of the removal of historic monuments and statues because certain individuals or groups find them offensive?”

Q “Do the violent protests in Wisconsin make you more or less likely to vote for Trump?”

Q “Has President Trump’s approach to the ongoing protests and riots been too tough, just right under the circumstances, or not tough enough?”

Q “Do you approve/disapprove of President Trump’s handling of the protests and riots?”

Q “Has Joe Biden been sufficiently critical of the violent rioting?”

Q “Should government prioritise law & order on city streets or prioritise improving relations between Black Americans and the police?”

Q “Do you support de-funding your local police department?”

Q. “Are you strongly or very enthusiastic about your choice of candidate?”

Q. “Is your vote for Trump/Biden a positive vote for your candidate or a negative vote against his opponent?

President Trump fared well in national job approval, with 52 percent approving and 46 percent disapproving. The breakdown by party, age, religion, and ethnicity was:

Sixty-seven percent of poll respondents believed “the economy [is] rebounding from the COVID-19 pandemic-induced shutdown,” and 59 percent of respondents trusted Trump to do the best job handling the economy, while 41 trusted Biden.

Only 44 percent of respondents approved of President Trump’s handling of the COVID-19 pandemic, while 48 percent disapproved.

By more than a two-to-one margin, 67 percent to 31 percent, poll respondents said that Trump will do a better job of standing up to China than Biden.

By a two-to-one margin, 67 percent to 33 percent, poll respondents want their local school to reopen soon.

Fifty-nine percent of poll respondents “think Joe Biden is experiencing some form of cognitive decline, such as the early stages of dementia.”

Forty-eight percent of poll respondents say their “opinion of Joe Biden’s mental acuity” makes them less likely to vote for him.

Biden has the edge in voter perceptions of consensus building, with 55 percent of respondents describing him as a “consensus builder,” a term only 20 percent apply to President Trump.

With barely two months until the November 3 presidential election, the most recent Democracy Institute/Sunday Express Poll results suggest that momentum in the race is moving swiftly towards President Trump and away from former Vice President Biden, and that reactions to the violent Black Lives Matter protests is the most significant explanation for that change.