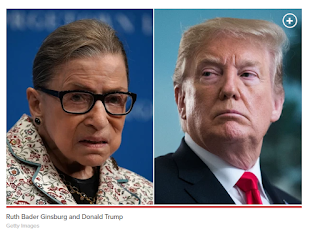 President Trump already knows who he wants to replace Justice Ruth Bader Ginsburg on the Supreme Court, according to a report.

Trump told confidants he was “saving” Judge Amy Coney Barrett for the seat last year during deliberations over who should replace retiring Justice Anthony Kennedy, according to Axios.

“I’m saving her for Ginsburg,” Trump reportedly said about Barrett.

Barrett, a judge on the US Court of Appeals for the 7th Circuit, was a popular choice among conservatives at the time. The 47-year-old has strong ties to her Catholic faith and signaled an openness to overturning Roe v. Wade.

Ginsburg, 86, returned to the bench recently after undergoing lung cancer surgery. Last year, the Brooklyn-born trailblazer said she plans to remain on the bench for “at least five more years.

at September 18, 2020
Email ThisBlogThis!Share to TwitterShare to FacebookShare to Pinterest
Labels: TIN TỨC