Trump 4 points ahead of Biden in Florida; poll shows first lead in state for president all year

Trump 4 points ahead of Biden in Florida; poll shows first lead in state for president all year 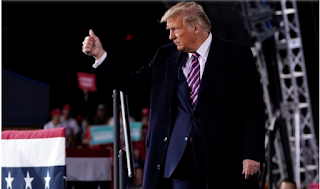 Statistically, with the poll’s margin of error at plus or minus 5 percentage points, the two candidates are tied.

The FiveThirtyEight average of multiple Florida polls — including the Post/ABC survey — puts Biden at 48.1% and Trump at 46.3%, a difference of 1.8 points. It’s the closest the polling average has been all year.

A slightly broader sample in the Post/ABC poll finds Biden 1 point ahead of Trump among registered voters, 48% to 47%, also a statistical tie. In the final stages of a campaign, major pollsters refine their samples and emphasize the results for likely voters, who are the people who are most likely to actually vote.

Biden’s biggest strength is among Black voters, and women, though his lead among women isn’t as great as Trump’s advantage with men. Biden has a 75-point lead among Black registered voters.

The contest in Florida is critical. It’s the largest of the battleground states that could go either way, and it awards 29 of the 270 electoral votes required to win the presidency.

And it has a history of extremely close races. In 2016, Trump won 49% of the vote statewide to Democrat Hillary Clinton’s 47.8%. Democratic strategist Steve Schale, in a recent analysis, reported that more than 51 million votes have been cast for president by Florida voters since 1992. Less than 20,000 separate Republicans and Democrats.

Trump’s approval rating in the latest poll is 47% favorable and 51% negative, a net negative of 4 percentage points.
Trump’s approval is consistently higher in Florida than the rest of the country. The latest RealClearPolitics polling average finds Trump’s nationwide approval at 45% and disapproval at 53%, a net negative of 8 points.
In Florida, the Post/ABC News poll found 54% of registered voters approve of Trump’s handling of the economy and 45% approve of his handling of the coronavirus.

The Washington Post-ABC News poll was conducted Sept 15-20 with calls to landlines and cellphones. Pollsters surveyed 765 registered voters, including 613 likely voters. The CNBC-Change Research poll said it used “targeted online ads that point people to an online survey instrument.” St. Pete Polls used automated robocalls.
Pollster ratings from FiveThirtyEight give the Post-ABC News polls an A plus for their data gathering and accuracy. St. Pete Polls has a C rating and Change Research is rated C minus.
Anthony Man can be reached at aman@sunsentinel.com or on Twitter @browardpolitics

at September 23, 2020
Email ThisBlogThis!Share to TwitterShare to FacebookShare to Pinterest
Labels: Election