The Looming Threat of a Socialist America

The Looming Threat of a Socialist America 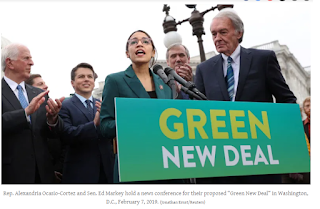 As the far-left congresswomen known as the Squad celebrated their overwhelming victories in Democratic primaries earlier this year, far-sighted radical strategists were plotting to achieve their long-range goal — a socialist America governed by, in the words of the Marxist group Socialist Alternative, “a tested Marxist leadership.”

For those who say it can’t happen here, there are warning signs aplenty.

In each case, the socialists defeated liberal Democrats who were attractive, organized, and had plenty of money. It didn’t matter — an overwhelming majority of Democratic primary voters endorsed the OAC-Tlaib-Omar vision of a socialist America, including the multitrillion-dollar Green New Deal.

This was only some of the evidence of a revolutionary shift in the Democratic Party that is on its way to becoming the Socialist Party. Three senior Democrats in the House of Representatives lost their seats to AOC-like candidates. Representative Lacy Clay of Missouri, a 20-year incumbent, lost to Cori Bush, a Black Lives Matter leader. Representative Eliot Engel of New York, chairman of the House Foreign Affairs Committee, was defeated by progressive school principal Jamaal Bowman. Representative Dan Lipinski of Illinois, one of the very few pro-life Democrats in Congress, lost to leftist challenger Marie Newman.

The grassroots efforts of Democratic Socialists of America (DSA) and similar left-wing groups are paying significant dividends. In New York, five statewide candidates for the General Assembly who had been endorsed by DSA all won their primaries. Several had come-from-behind victories because of absentee ballots — a key socialist initiative. At least two self-described democratic socialists not endorsed by DSA also won statewide races.

They ran on platforms that included the Green New Deal, single-payer health care, criminal justice reform, housing for New York State’s 70,000 homeless, affordable housing for the poor, and new taxes on the rich and Wall Street to pay for all of it. Their goal, as set forth in campaign literature, is to “advance a vision for a socialist world.”

Socialists found receptive voters across the country. In Philadelphia, democratic socialist Nikil Saval won the Democratic primary for the state senate. Summer Lee, the first Black woman to represent southwestern Pennsylvania in the state senate, won reelection with 75 percent of the vote. In Montana, six “Berniecrats,” backed by Our Revolution, a progressive political action committee, won their primaries. San Francisco elected Chesa Boudin, son of the leftist militants, its district attorney. In the California primary, exit polls revealed that 53 percent of Democrats viewed socialism “favorably.” In Texas, Democratic voters in the primary approved of socialism by 56 percent, a 20-point margin over capitalism.

Socialism is indeed riding a wave of momentum when more Texans than Californians view it favorably.

Socialists are building on the remarkable candidacy of Senator Bernie Sanders, who raised more money than any other candidate in 2020 (an estimated $200 million), enlisted an unprecedented army of volunteers, and won the Iowa caucuses and the primaries in New Hampshire and Nevada. But he was unable to overcome the still-powerful Democratic establishment, which rallied behind former vice president Joe Biden.

Socialist strategists are calculating how best to push the Democratic Party farther to the left. Writing in Jacobin, Curt Ries argues that socialists need stronger institutions on the left, especially more militant labor unions. Ries, who worked in the Sanders campaign, points out that only three smaller unions backed Sanders. He also claims that socialists need more activist organizations like DSA, Our Revolution, and the Sunrise Movement, along with more independent media like Democracy Now! and Jacobin.

Socialists need “class-struggle elections,” argues Ries, that pit the people against the ruling class and focus on “the greed and corruption of capitalism.” Socialists believe, he said, that with the multiple crises in the economy, government, and public health, fnow is the time to push for a world where “all people can live with dignity, security, and freedom.”

The Socialist Alternative has called for the formation of a new left party with “a clear socialist program and a tested Marxist leadership.” The Call, a publication run by Bread and Roses, a caucus of Marxist organizers, has declared, echoing Karl Marx, that American workers need “a mass working class party.” The Sunrise Movement, a youth-led leftist climate group, has cautioned that a workers’ party should not be an “immediate” goal. But those on the far left agree that a workers’ party is “a crucial strategic goal for the socialist movement.”

These radicals clearly see themselves as a revolutionary vanguard like the Bolsheviks of 1917, prepared to strike when the moment is ripe to bring down a weakened political and economic structure. Although they are comparatively few — DSA has a membership of about 70,000 — they are committed. They have helped to elect a number of national and local candidates. According to the polls, the mood of the country is favorable to radical solutions such as free education, free health care, and the Green New Deal, which would eliminate oil, coal, and natural gas as energy sources.

Writing in Javelin, DSA strategist Jared Abbott refers to a great debate that will take place between pragmatists and idealists on the left. Should socialists adopt a strategy of coalition-building with Democrats and others on the left? Or follow a strategy of confrontation with Democrats, running their own candidates and building a combative class-centered left-wing organization?

Resolution of the debate depends in large measure on our national leadership. A Democratic president and a Democratic Congress would strengthen the pragmatists’ call for collaboration. A Republican president with a Republican Senate would enhance the idealists’ strategy of confrontation.

Given the electoral gains cited above, are we certain that a socialist America is impossible — especially when 70 percent of Millennials say they would vote for a socialist? We cannot depend on someone else to step forward. We must go on the offensive, disseminating the truth about socialism and the free-enterprise alternative.

We must point out that socialism has never worked anywhere, most recently in Venezuela and in past years in Israel, India, and Great Britain. We must show that it is based on the failed prophecies of a delusional economist named Karl Marx, who predicted two centuries ago that capitalism would wither away, that socialism would mean the end of private property and of small businesses, of which there are now 30 million in America.

Further, we must explain that, thanks to free enterprise, one billion people left poverty and a new middle class has formed around the world — that capitalism not socialism has brought greater wealth and more freedom to more people than any other economic system in history.

Unlike the rights that Thomas Jefferson wrote about in the Declaration of Independence, these facts are not self-evident. We must present them untiringly and defend them ceaselessly. The alternative — losing our country to so-called democratic socialists — is unthinkable.

at September 09, 2020
Email ThisBlogThis!Share to TwitterShare to FacebookShare to Pinterest
Labels: Bình Luận