'The Dems Are Panicking': Bloomberg Caught 'Buying Votes' In This Battleground State

'The Dems Are Panicking': Bloomberg Caught 'Buying Votes' In This Battleground State 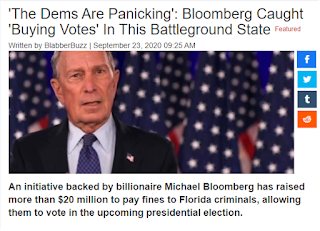 Bloomberg, NBA star LeBron James and singer John Legend were among those who helped the Florida Rights Restoration Coalition do the fundraiser.

The effort attracted contributions from more than 44,000 people and surpassed the $ 20 million milestone, the coalition announced Tuesday.

"The right to vote is fundamental to our democracy, and no American should be denied that right," Bloomberg, a former Democratic presidential candidate, said in a statement.

"Working together with the Florida Rights Restoration Coalition, we are determined to end the disenfranchisement and discrimination it has always motivated."

“The ability to vote must be unimpeded and free. With this effort, we are creating a more inclusive

democracy, of which we can all be proud, ”added Desmond Meade, executive director of the coalition.

In November 2018, Florida passed an amendment, commonly known as Amendment 4, to the state constitution that allows ex-convicts to vote “upon completion of all terms of the sentence, including parole or probation,” but excludes those who were convicted of murder or serious sex crime.

Florida Republican Governor Ron DeSantis signed a bill approved by the state legislature the following year, requiring all ex-offenders to pay outstanding fines and fees before they are granted the right to vote.

The Florida Supreme Court sided with the governor in January. A court battle unfolded around the law, with an appeals court and federal judge blocking the state from enforcing it until the US Supreme Court ruled in July that the law would remain in place.

On September 11, the US Court of Appeals for the 11th Circuit also ruled in favor of DeSantis.

The rulings affected about 700,000 former criminals in Florida, according to the coalition.

Florida is a critical state that could determine whether President Donald Trump, a Republican, gets a second term.

Bloomberg's involvement in the coalition's fundraiser came after he promised to spend $ 100 million in Florida to boost the campaign of his former rival, Democratic presidential candidate Joe Biden.

Trump scoffed at the move, writing on Twitter: "I thought Mini Mike had ended Democratic politics after spending nearly $ 2 billion and then delivering the worst and most inept debating performance in the history of presidential politics." 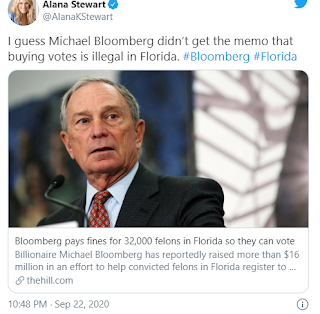