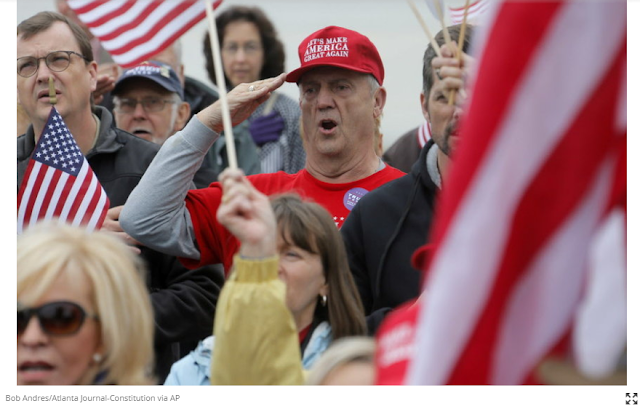 The great realignment is over.

The Republicans are now the working-class party while the Democrats are the party of the political establishment.

He hasn’t achieved all of his goals because realigning the parties takes time. And Washington has proven to be a tough customer.

Trump made an audacious play for Black working-class voters by signing criminal justice reform, showing compassion for African-Americans who were unfairly caught in the prison system and enacting policies that put Black Americans back to work in record numbers.

Joe Biden has been caught flat-footed and is forced to align himself with Black Lives Matter elites who promote socialism, condone violent protest and promote racial separatism. For the man who previously championed tougher anti-crime provisions that put many Black men in prison, this is not an easy transition.

Trump rightly sees China as the biggest threat to working class America. He sees the shuttered factories, the lost jobs, the misery that has spread across the vast middle of America and wants to do something about it. He calls out China for their role in spreading the worst pandemic in history, using graphic but descriptive language that offends the business and political elite that like to do business there.

According to intelligence agencies, Joe Biden is China’s preferred candidate. That comes as no surprise. He and his family have a long history of doing business there. He thinks trade with China is good for America, supported permanent normal trade relations, and says things like “come on, man, China is not an economic threat to America.” Tell that to the working-class party, Joe.

When it comes to pandemic, Trump has been realistic. The cure can’t be worse than the disease. We need to open up the country up as soon as possible, we need kids to go back to school, we need to get back to business. Biden, mirroring the desires of the ruling class, wants to keep the people in a state of panic because that allows the politicians to exert even more control over the private sector.

For working Americans, those who can’t afford to rent a camper and travel the country for a year, more lockdowns are deadly. Trump is with those who want to move on.

It comes as no surprise that the political elite has closed ranks behind the Biden campaign. Political strategists on both sides of the aisle are now working overtime to stop Donald Trump and his working-class party.

Trump has an annoying habit of trying to keep his promises. The political establishment party doesn’t like that, because if we solved all of our nation’s problems, what would we run our next campaign on?

Trump is the outsider’s outsider. He came into government having no clue about the vast scope, power and expense of the federal bureaucracy. He didn’t fully understand how much work it takes to tame the bureaucrats, how careful you have to be in public and private utterances, how words can be taken out of context and how brutal the infighting can be, even among your closest friends and allies.

But being an outsider is no vice in the working-class party. The political establishment has spent years making false promises, promoting polices that have consistently helped globalization but have hurt local businesses and enriching themselves at the expense of the rest of the country. Working class Americans of all colors and creeds are tired of the political games of the political establishment and they are more than willing to give Donald Trump four more years to finish the job of making America great again.

Feehery is a partner at EFB Advocacy and blogs at www.thefeeherytheory.com. He served as spokesman to former Speaker Dennis Hastert (R-Ill.), as communications director to former Rep. Tom DeLay (R-Texas) when he was majority whip and as a speechwriter to former House Minority Leader Bob Michel (R-Ill.).

at September 03, 2020
Email ThisBlogThis!Share to TwitterShare to FacebookShare to Pinterest
Labels: Bình Luận