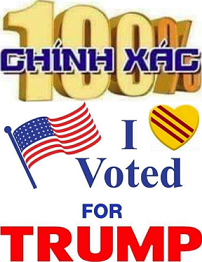 English version:CRAZY FOR TRUMP OR TRULY CRAZY? LET OUR VOICES BE HEARD!Why do the Vietnamese refugees who fled from communism strongly support President Trump?The reason is that President Trump had already considered the communists as enemies! Out of the 44 US Presidents in history, no one had blatantly declared war on the Chinese CommunistParty like President Trump. It is not as if we are blinded or deaf to acknowledge this truth, are we? Below are the facts of President Trump’s actions against the Chinese Communist Party (CCP) that make everybody “crazy for Trump”:1) President Trump started an economy war against the CCP by imposing 10%-30% tariffs on more than 500 billion dollars on shipments of goods imported from Communist China that exhausted the Chinese economy.2) President Trump burned Xi Jing Ping’s valuable asset by ordering the arrest of Ms. Meng Wanzhou, VP and Chief Financial Officer (CFO) of Huawei on December 1, 2018, and isolated Huawei.3) President Trump ordered the closure of the Chinese Consulate in Houston, crushing the CCP spy lair there; and at the same time, he also called upon the world to join forces to defeat the CCP.4) President Trump ordered the continuous pursuits, searches, arrests, and expulsions of the CCP spies in the US. He also signed a decree to limit and prohibit Chinese people from entering the United States.5) President Trump ordered a search of the Chinese Communist officials involved in the introduction of the Hong Kong security bills and froze their properties and assets. With this bill, it was an intention to keep the Xi Jing Ping’s bloodthirsty regime to continue to thrive.6) President Trump imposed sanctions on 24 companies and all 12 Chinese individuals deemed involved in the construction of artificial islands near the Spratly-Paracel Islands and the militarization of the South China Sea.7) President Trump ordered the closure of all Chinese Confucius Institutions in the US by the end of 2020.8) At the international forum, President Trump stated that communism society are barbaric and are needed to be destroyed. He also bluntly criticized that Xi Jing Ping’s words are deceitful that figuratively are like having two tongues; however, the Vietnamese Communist Party has four tongues and are even more deceitful. This is to say that the Vietnamese communist is also one of his thorns!9) In general, whatever method that is capable of destroying or weakening the CCP, President Trump will put them into action. The only move left now is to start a war that President Trump will be planning during his second term! Are these not enough validations to warrant President Trump’s intention and his strategies by now?10) On the other hand, Joe Biden and his party are desperate to invite Xi Jing Ping back to the US, allowing communism to come back and brainwash America once again! On top of that, for the longest time, the Democrats also support abortion, which is the murder of the innocent. Do they not hear the unborn babies in the mother’s womb crying out, “I want to live”? Do they not have any morals? They claim they fight for the people, but how come they won’t fight for the innocent, to give them a chance at life?We know that “the choice of choosing the next president” is an individual’s decision. To the American people, they can choose whomever they desire because they were not refugees who escaped the hands of the communist regime. Moreover, they have never experienced communist crimes, what a miserable life is under the Communist regime!However, I ask to the Vietnamese people who fled from their communist country, “Between the two candidates, one is President Trump who determined to abolish communism while the other is Joe Biden who supports a communist country. Who would you choose and vote for? Which president will be ideal and an aspiration to your own beliefs and stance?”You are constantly advocating, shouting, and supporting anti-communism. Yet, for someone like President Trump who is trying to fight the communist and would help you destroy this regime, you would look the other way. Not only that, you would turn around and violently rally against President Trump. You claim that you are an “anti-communist”, yet you do not want communism to be destroyed..So what exactly are you fighting for? Is this really all just for show amongst the large number of fellow Vietnamese refugees?During the election period between the two opposing candidates, President Trump and Joe Biden; this has revealed to all of us the fact of each person, and the truth behind each platform through their associations, organizations, and media that often shout out “Anti-communism.” We the people have seen through it all. Who is against communism only for his private gains, and who is truly against it wanting to completely destroy the regime has become clear.How strong the Mother Mushroom Nhu Quynh Ngoc Nguyen would be against communism so that the fellow Vietnamese greatly admired and even all came to welcome her at the airport with patriotic flags and banners? However, the grain of rice of gratitudethat was given by President Trump and his wife to Mother Mushroom to swallow, but has not yet passing through her throat, she quickly turned against Trump. This behavior is outright ungrateful and despicable!Nonetheless, President Trump had also prevented the Communist Party from taking over the South East Sea and saved Spratly-Paracel Islands to help regain a part of our homeland.Why is that you have to treat President Trump with such disrespect and ungraciousness?As being said: Not only are you against President Trump but you also called his supporters “Too Fanatically Crazy for Trump”. You escaped communism, lashed out at the idea of socialism, yet you favor someone like Joe Biden who supports what you have been strongly fighting against after all these decades? Is this not what you called complete madness?As a final thought, for those who stand to fight against the communism and its destruction, we would rather be “CRAZY FOR TRUMP” than to be in complete madness so called “TRULY CRAZY”!Hoai Nam