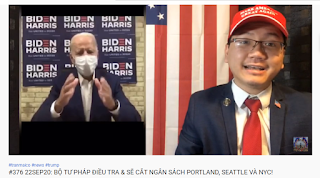 After the death of George Floyd in May, the U.S turned into a hotspot for peaceful protests, but also relentless, violent riots. Voices turned into violence, marches turned into looting and the message was arguably lost in translation.

Now, a group of House Republicans are calling on the FBI to investigate who is funding these riots, where the money is coming from and how best to hold them accountable.

According to the Daily Caller, in a letter written to FBI Director Christopher Wray, “Republicans called for justice to be given to the people and groups providing funding for the destruction of cities and towns across the country since the death of George Floyd.” The letter concluded with the signature of nearly two dozen House Republicans, and called out Antifa for enacting “domestic terrorism.”

“The Department of Justice and FBI’s leadership is needed to bring to justice those who have funded these criminal organizations and to give justice to the communities who have been devastated by these individuals and organizations,” claimed the letter, originally obtained by Fox News.

“Many cities across our country have been rocked by rioters associated with Antifa and other organizations,” the letter continued. “These individuals seem to be using cowardly efforts to commandeer otherwise peaceful protests. These actions constitute domestic terrorism and federal charges must be brought against those who are aiding and abetting the criminal actions of these organizations.”

For months, riots have sprouted across the country, ending with defaced statues, looted businesses, burnt buildings and cities left in rubble. Federal buildings and police offices have also been vandalized to further amplify the message at hand: the country needs significant police reform.

In order to progress and make the desired institutional changes, many lawmakers believe that those in charge of inciting these heinous crimes and destroying the cities they call home need to be punished accordingly. The violence, rioting and looting are only taking away from the message that peaceful protesters are striving to convey.