Why Did a Chinese Diplomat Walk All Over People on a Pacific Island?

Why Did a Chinese Diplomat Walk All Over People on a Pacific Island? 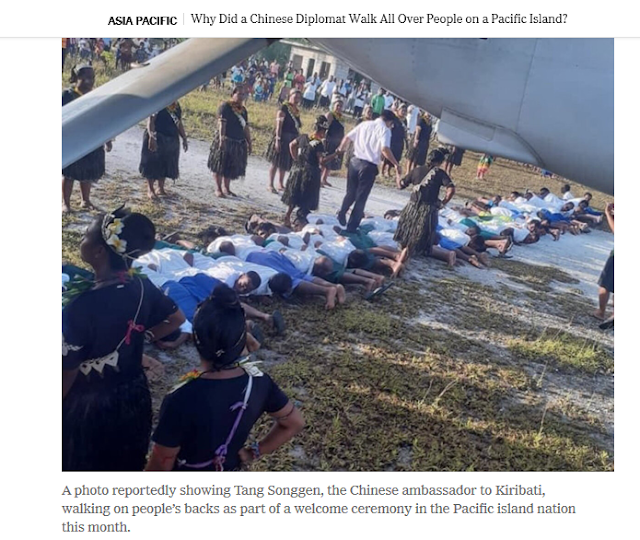 SYDNEY, Australia — The grainy photograph certainly said something about China and the Pacific: It showed the Chinese ambassador, Tang Songgen, walking over the backs of 30 people on a remote island in the nation of Kiribati soon after he had landed on a grassy airstrip.

To some, especially American and Australian officials who helped the image go viral this week, there was no greater symbol of Chinese “Wolf Warrior” diplomacy — in their view, it reinforced Beijing’s domineering, colonial approach.

To others, including people from Kiribati, the criticism was a sign of ignorance. The ambassador was simply taking part in a local welcome ceremony, typically reserved for weddings, that elders had chosen to adapt.

Whether it was inappropriate statecraft or a tempest in a tropical teapot, the debate reflected a new reality for the nations of the Pacific: They suddenly matter again in geopolitics. China and the United States are waging a war of influence across the vast region that often brings aid and attention — but also an urge to talk (or walk) first and ask questions later.

“Our islands have always been geopolitical playgrounds for others,” said Katerina Teaiwa, an associate professor at the Australian National University’s College of Asia and the Pacific, whose father is from Kiribati. “Given all that, it’s quite frustrating for Pacific Islanders not to be taken seriously or heard.”

The photo’s viral surge cannot be separated from both the global and local context.

Kiribati, a former British colony near the Equator that is made up of 33 islands sprawled over 1.4 million square miles of ocean, is one of several Pacific countries that have gradually taken on greater importance for both Beijing and Washington as their bitter rivalry has intensified.

It is primarily a matter of location. Kiribati is the closest neighboring country to Hawaii. All together, the hundreds of sparsely populated islands in the Pacific occupy 15 percent of the globe’s surface, sitting like scattered chess pieces right between China, the United States and Australia.

“For their small size, they have really profound strategic significance,” said Jonathan Pryke, director of the Pacific Islands Program at the Lowy Institute, a Sydney think tank. “In the Second World War, these tiny islands in the middle of a far-flung ocean had immeasurable strategic importance, and the geography hasn’t changed much since then.”

China has been building momentum in the region, with victories just starting to emerge. Last month, Papua New Guinea joined nations like Iran and Venezuela in voting to support a United Nations resolution endorsing the draconian new security law that China had imposed on the semiautonomous territory of Hong Kong.

In January, the Solomon Islands, where some of the most important battles of World War II were fought, cut ties with the self-ruling democracy of Taiwan and shifted its allegiance to Beijing, which claims Taiwan as part of China’s territory. A few days later, Kiribati (pronounced keer-uh-bas) followed suit.

The shift brought immediate praise from China’s leader, Xi Jinping. He celebrated Kiribati and its president for being “on the right side of history” after the two countries signed a memorandum of understanding that brought the island nation into China’s Belt and Road infrastructure initiative and established diplomatic ties.

Soon after that, Mr. Tang became China’s first ambassador on the ground there, where he has been fielding requests for help raising portions of the islands to evade rising seas from climate change. But the image of him walking on the backs of others gave him a new visibility.

It is unclear where the photograph came from. It seems to have been taken from beneath the plane that took the ambassador to the small island of Marakei during a visit earlier this month.

According to a statement that the Chinese Embassy in Kiribati posted on Facebook on Monday, the trip was purely educational, aimed at promoting “mutual understanding” and exploring “cooperation opportunities.”

The statement did not defend or explain the welcome ceremony, but it appeared to be a response to the discussion online after the image was posted on Facebook and Twitter a few days ago.

Cmdr. Constantine Panayiotou, the U.S. defense attaché based in Fiji, was among those who took up the cause, delivering a rebuke on Twitter: “I simply cannot imagine any scenario in which walking on the backs of children is acceptable behavior by an ambassador of any country (or any adult for that matter!) Yet here we are thanks to China’s ambassador to Kiribati.”

Australian officials provided a similar critique, prompting a flood of objections from people who were familiar with the ritual. Some pointed out that the people lying on their stomachs all seemed to be adults. Others noted that the ceremony was an expression of respect, initiated not by the ambassador, but rather by local elders.

“This is mainly seen at weddings but not all islands,” Dr. Teaiwa wrote on Twitter. The people of Marakei, she added, have a right to decide how to welcome people, and they were “probably trying something extra customary to show honor and hospitality.”

In an interview, she said she believed that an Australian ambassador had once taken part in a similar ritual. (Australia’s Department of Foreign Affairs and Trade said that it was not aware of any senior diplomat ever participating.)

Commander Panayiotou, when asked about his response on Wednesday, said that he would not be able to comment except to say that the tweet “reflects my own personal opinions,” not the official position of the U.S. Embassy in Fiji or the Defense Department. Other American officials have said they are worried that China will exploit rampant corruption in Kiribati to build strategic outposts on Christmas Island, which sits south of Hawaii.

Anne-Marie Brady, a professor at the University of Canterbury in Christchurch, New Zealand, who has frequently criticized the Chinese government’s approach to the region, said the intent of the ceremony simply could not compete with the way it would be viewed: “as a visual image of the perceived unbalanced neocolonial relationship.”

And maybe that scrutiny of colonialism should continue, Dr. Teaiwa said — but more broadly, to include how the United States, Australia and the rest of the world treat a region they seem to consider only when a risk of conflict in Asia arises.

“Islanders are infantilized by foreign governments, development experts, missionaries, tourists and researchers from all disciplines,” she said. “The China-U.S.-Australia tug of war is frustrating when it removes the voices and agencies of Pacific leaders and communities — especially communities.”

at August 20, 2020
Email ThisBlogThis!Share to TwitterShare to FacebookShare to Pinterest
Labels: Bình Luận