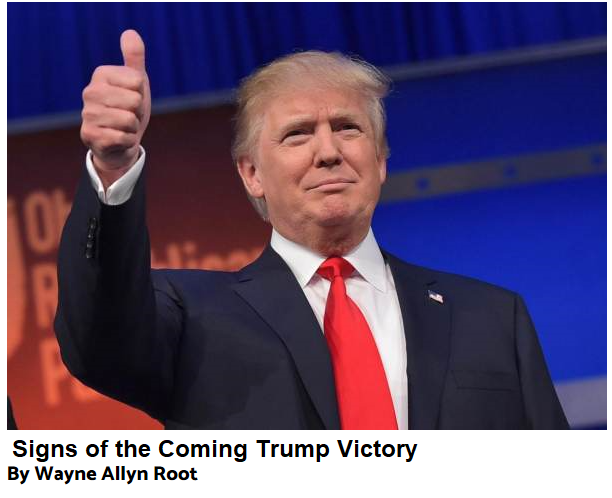 Don’t kid yourself. Don’t be fooled by the bravado. Democrats behind the scenes are scared and getting more desperate by the day. Because there are so many signs of a coming Trump victory.

The signs are everywhere.

Polls show an overwhelming majority of Americans don’t want to defund police. They want law and order. They support police. Even 80% of black voters overwhelmingly disagree with defunding police.

Does anyone with a brain or common sense think this is a good sign for Biden or Democrats? Do you think all these Americans who support the police; and want more law and order; and want more funding for police, not less; are leaning to “law and order Trump,” or “defund the police Biden?”

Does anyone with a brain or common sense think this is a good sign for Biden or Democrats? Do you think all these millions of suburban American homeowners who don’t want to see their home values destroyed; or their neighborhoods turned into war zones like Chicago, Detroit or Baltimore; are going to vote enthusiastically for Joe Biden?

But there are more signs.

The race to escape the big city crime wave and rioting-looting is accelerating at warp speed. Ask any suburban realtor. Ask any moving company. Everyone with any kind of ability to move, is “getting out of Dodge.” The escape from Democrat-controlled big cities is so huge, it is the trend of 2020.

Even liberal New Yorkers are running for their lives. Shootings are up 76% in the past year in New York City. Murders are skyrocketing. The purchase of bulletproof vests is up by over 80% in NYC. You think these people are voting for Biden?

Remember Biden’s presidential platform actually puts in writing his goal to supercharge Obama’s “destroy the suburbs” program. Biden wants to bring Frankenstein back to life, except twice as big. Goodbye to your safe, peaceful suburban life. Trump wants to protect your neighborhood. I wonder who suburban moms and dads will vote for?

But it’s not just New York. Everyone is selling their homes and moving away from every Democrat big city- Chicago, LA, San Francisco, Seattle, Portland, Minneapolis. Defund police? The only group getting defunded is Democrat politicians and government bureaucrats. Bye bye to tax revenues.

Does anyone with a brain or common sense think this is a good sign for Biden or Democrats? Do you really believe most of these people are running for their lives from deep blue Democrat cities for the safety of red Republican suburbs, just so they can vote for Biden and the Democrats?

According to Rasmussen 72% of likely voters are concerned with violence in major cities. 62% say it will affect their vote. Do you think this is a good sign for Democrats who support BLM and Antifa and claim there is no violence?

And then there’s the guns. America is sold out of guns. And bullets too. There is nothing left. Since Covid and the rioting struck, every gun and bullet in this country has been bought up. All-time gun sale records in the history of America have been broken month after month. Everyone is locked and loaded.

Does anyone with a brain or common sense think this is a good sign for Biden or Democrats? Do you think any of these record-setting gun buyers is voting for Basement Biden, Kamala Harris, and Beto O’Rourke, Biden’s gun czar who will be in charge of forcefully taking away our guns?

Remember when Dukakis was up after his convention by 17 points over George HW Bush? Bush won the electoral vote by 426 to 111.

Remember when Jimmy Carter led Reagan by 10 points over the summer of 1980? Reagan won in a historic landslide.

Don’t look now…but it’s about to happen again. The signs are everywhere. Trump is about to win an electoral landslide.

at August 21, 2020
Email ThisBlogThis!Share to TwitterShare to FacebookShare to Pinterest
Labels: Bình Luận