America as 'land of heroes': Quotes from Day 3 of Republican National Convention

America as 'land of heroes': Quotes from Day 3 of Republican National Convention 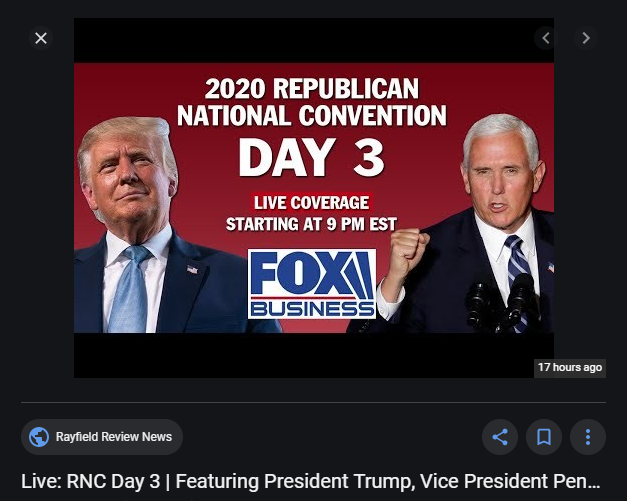 “When you consider their agenda, it’s clear: Joe Biden would be nothing more than a Trojan horse for a radical left. The choice in this election has never been clearer and the stakes have never been higher. Last week, Joe Biden said democracy is on the ballot, but the truth is ... our economic recovery is on the ballot, law and order is on the ballot. But so are things far more fundamental and foundational to our country.”

“It’s not so much whether America will be more conservative or more liberal, more Republican or more Democrat. The choice in this election is whether America remains America.”

“Joe Biden says America is systemically racist. And that law enforcement in America has a quote, ‘implicit bias’ against minorities. And when asked whether he’d support cutting funding to law enforcement, and he replied, ‘Yes, absolutely.’”

“I believe America is an exceptional nation founded on three principles: equality, freedom and opportunity. But today our founding principles are under attack.”

“It took 244 years to build this great nation, flaws and all. But we stand to lose it in a tiny fraction of that time if we continue down the path taken by the Democrats and their radical supporters.”

“Tonight, I want to talk to you about another kind of hero. The kind Democrats don’t recognize, because they don’t fit into their narrative. I’m talking about the heroes of our law enforcement and armed services. Leftists try to turn them into villains. They want to ‘cancel’ them. But I’m here to tell you these heroes can’t be canceled.”

“Ask yourself, has this president kept his promises … to keep us out of needless conflicts and to pursue ending wars without end? Has he defended your interests in renegotiating trade deals that previously hurt Americans and our national security? Has he fulfilled his commander in chief role by decisively going after our nation’s enemies? You and I know, the answer is yes.”

“We need to remind ourselves of what heroism really is. Heroism is self-sacrifice. It’s not moralizing and lecturing over others when they disagree. Heroism is grace, not perpetual outrage. Heroism is rebuilding our communities, not destroying them. Heroism is renewing faith in the symbols that unite us, not tearing them down.”

“A woman in a leadership role can still seem novel. Not so for President Trump. For decades, he has elevated women to senior positions in business and in government. He confides in and consults us, respects our opinions, and insists that we are on equal footing with the men. President Trump helped me shatter a barrier in the world of politics by empowering me to manage his campaign to its successful conclusion.”

MICK MCHALE, PRESIDENT OF THE NATIONAL ASSOCIATION OF POLICE ORGANIZATIONS, A UNION GROUP:

“Our endorsement recognized his strong support for the men and women on the front lines particularly during these challenging times.”

“The differences between Trump/Pence and Biden/Harris are crystal clear. Your choices are the most pro-law enforcement president we’ve ever had or the most radical anti-police ticket in history.”

“The CCP (Chinese Communist Party) is an enemy of humanity. It is terrorizing its own people and it is threatening the well-being of the world. In China, expressing beliefs or ideas not approved by the CCP - religion, democracy, human rights - can lead to prison. The nation lives under mass surveillance and censorship. The U.S. must use its values of freedom, democracy and the rule of law to gather a coalition of other democracies to stop CCP’s aggression. President Trump has led on this and we need the other countries to join him in this fight, a fight for our future.”

at August 26, 2020
Email ThisBlogThis!Share to TwitterShare to FacebookShare to Pinterest
Labels: Bình Luận